M is for the Marvin Envelope Building. F is for its Future 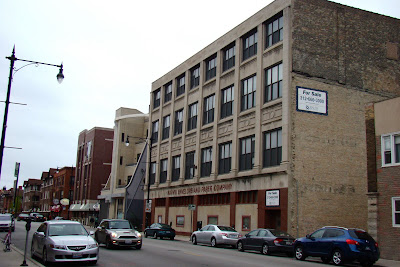 Alerted by a reader to a public hearing at the Zoning Board of Appeals at City Hall on Friday, Sept. 17, The Pipeline popped by the Marvin Envelope Building, 2040 W. North, this past Wednesday. We noticed this partially obscured Public Notice.

By noon the following day, the notice, which expressed plans to establish an indoor sports/ fitness facility, was no longer obscured.

On Friday we attended the hearing to learn more about the adaptive reuse of the vacant industrial building, listed for sale by Baum Realty since May, 2009--on the market for $4,550,000, per this LoopNet listing entry, last verified Sept. 2, 2010. The building has a contract purchaser, Larry Weiner, co-owner of Marc Realty.

Weiner intends to purchase the 37,000 sq. ft., four-story concrete and steel frame building contingent upon the space receiving two zoning variances, the first related to establishing the Special Use facility in a building zoned M1-2, and the second to allow the facility to be licensed without providing a minimum of eight permanent parking spaces required by city ordinance.

If the variances are approved, Weiner's company, Marc Realty, would then purchase and redevelop the property on behalf of its client, the Chicago Athletic Clubs (CAC), which operates facilities in Lakeview, Lincoln Park, Evanston, and the West Loop.

Among those present at the hearing were Weiner's lawyer, Thomas Moore, expert witnesses hired by Moore, Pat Cunningham, president of CAC, Helena Williams, CAC's membership director, Jonathan Swift, the project's architect, Paul Savojec, 32nd Ward Alderman Scott Waguespack's Chief of Staff, and three citizens who objected on grounds that there is not sufficient parking available for the proposed club's clientele.

Teddy Varndell, secretary of the Wicker Park Committee, testified as an objector, saying, "We pride ourselves on not having zoned parking. Neighbors who live in the Landmark district for the first time will petition for zoned parking. It will directly impact the quality of our neighborhood."

Angie Lory, a Realtor who lives just a half block west of the Marvin Building, at what she described as the "Leavitt, Concord and Caton triangle," said that she does not believe there was enough of an effort to market the building for residential conversion.

"We cannot afford a place so large that will house so many people," Lory said, concluding her testimony. Also objecting was Jaime Rodriquez, owner of Bucktown Fitness Club, 2100 W. North, just 60 yards from the Marvin Envelope building. Rodriquez testified that he provides 32 permanent parking spaces for the members of his two-level, 12,000 sq. ft. club, a former manufacturing facility which he purchased in the late 1980s.

"I strongly would like their application to be denied," Rodriquez stated. (Full disclosure: Bucktown Fitness Club is a Pipeline advertising sponsor).

Joseph Ryan, an independent real estate appraiser hired by Moore, testified that the building was evaluated for residential usage, as well as for mixed office and retail purposes. Ryan determined that the building is deemed obsolete for industrial use. "If this use is not allowed as a special use, the building would probably be torn down," he opined.

Sajovec spoke on behalf of Waguesack's office, as well as favorably of the proposed club. Sajovec testified, "We thought it was a creative and interesting use of the space." He added that Alderman Waguespack is supportive of transit orientated development. He cited a plan for CAC to offer indoor bike parking, accommodating 50 bicycles, a tax free transit credit to its employees, and the proximity to Six Corners, "one of the most transit friendly areas on the North side," per Sajovec, as assets to the redevelopment.

Helping to scout out the location was CAC's membership director, Helena Williams, who noted, "It's a wonderful location, densely populated, and in proximity to the El and three buses."

Permanent parking for the club, as well as a driveway and vehicular egress, are currently unavailable save for the former obstacle possibly being assuaged by 10 spaces under the nearby El tracks which belong to the CTA, and nine additional spaces behind the Marvin Envelope building which served as the manufacturer's loading dock; it's unclear as of press time to which entity those spaces belong. During the course of the ZBA hearing, the availability of the CTA-owned spaces came as news to the objectors, as did the Dept. of Zoning's decision to raise its initial required number of parking spaces from 8 to 18, which were increased based on a more realistic occupancy for the four story club than the 150 occupants first estimated by its project architect.

After the hearing, The Pipeline followed up with WPC Board President Ed Tamminga, who provided a letter indicating that the general members of the WPC voted on July 7, 2010, 14 to 1 in favor of a "Special Use with parking," which in layman's terms means that the longtime neighborhood organization has no issue with a proposed health club, but wants to ensure that permanent parking is available for the club's clientele.

Reached by email, Sajovec clarified the parking requirements established by the ZBA. "Until last Thursday, we were told both by the project architects and Zoning that the requirement was eight spaces, " Sajovec wrote. "However, after taking a closer look at the plans, Zoning determined last Thursday that they would place the requirement at 18 spaces. In order for the spaces to count toward the requirement they have to be secured under 'long-term' agreements. However, long-term is not defined in the code. According to the testimony from the applicant, the Zoning Board of Appeals has previously accepted CTA license agreements for parking spaces because, although they can be voided by the CTA with 30 days notice, such licenses have no expiration date."

The Zoning Board of Appeals meets on the third Friday of each month in city council's chambers. This past Friday, only three of the five ZBA members were in attendance, thus if the three members present at the hearing do not vote unanimously in favor of approving the applicant's two variances, e.g. accepting the space as special use, and accepting the CTA licensed spaces as suitable for parking, a continuance will be requested for when all voting members are present. A decision is expected to be made soon.
- Orig. published in the Sept. 21st Pipeline e-newsletter Consult the newsletter link for links referenced in this story.
-AH

Ed. Note: The Pipeline strives to report fairly and accurately to the best of our abilities, with regard to the community as a whole and not to reflect the views of any one entity or agenda, our advertising sponsors not excluded. Any readers wishing to learn more about the proposed redevelopment may email the 32nd Ward Alderman's office, or call 773-248-1330. The Wicker Park Committee's next Preservation and Development Subcommittee Planning meeting, open to the public, is slated for tonight (Tues. Sept 21st, 7PM ) at the Wicker Park field house (Damen and Schiller).
Posted by Alisa at 8:05 PM