Dispatch from State of the Wards by Nandika Doobay 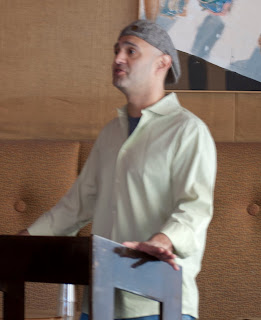 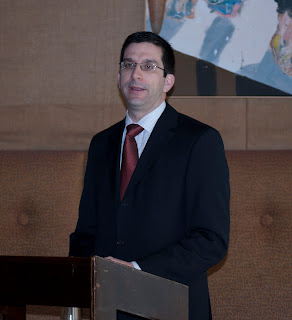 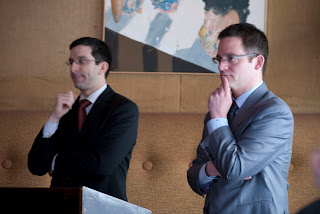 State of the Wards at Feast Restaurant

Local residents and members of the Wicker Park and Bucktown business community gathered Tuesday morning to hear Alderman Scott Waguespack and Alderman Joe Moreno speak about the current state of their wards, exactly one week prior to the Feb. 22 aldermanic elections.

Robert Gomez, owner of the Subterranean and current president of the WPB Chamber of Commerce opened the hour-long event at Feast on Damen by discussing his 15 years in the neighborhood. “When is Wicker Park and Bucktown going to change,” he would ask himself, years before gentrification transformed the once gritty neighborhood into a thriving community of high-end boutiques and Michelin rated restaurants.

32nd Ward Alderman Waguespack attributed positive changes made to the neighborhood to the hard work of the business owners and residents. “The city has a hard time saying no to a lot of the things we want done here in Wicker Park and Bucktown because you guys put so much effort into what you do,” said Waguespack. “You’re very detailed and you’re progressive in your thinking.”

Both alderman focused their discussions on upcoming development in the wards, such as the construction of a state-of-the-art LEED Gold certified parking garage to be built on the 1800 block of N. Milwaukee, directly across of Irazu restaurant. First Ward Alderman Moreno described it as being “not a parking lot in the traditional sense -- it’s a machine.” According to Moreno, the futuristic lot will hold up to 236 cars and is fully automated. “You just pull your car in, pay right there and it will park your car safely,” he said, adding that CTA vending machines will also be installed so that people can opt to leave their cars there and take the blue line into the loop. Moreno also supports plans for a free trolley that will shuttle patrons to stops along Milwaukee Ave. from the the parking garage to as far east as Ashland Ave. Construction on the lot is due to begin in spring.

At 1805 N. Milwaukee, a little south-east of the new parking garage, crews have been removing hazardous materials and cleaning up a site that will potentially be a hub for the soon-to-be developed Bloomingdale Trail. Alderman Waguespack said he is working with businesses and residents on a design plan that will turn the defunct rail line into a green space and linear park.

Other developments include the construction of a new building at the old Burger King site on the corner of Milwaukee and Honore. “It’s going to be a vegan restaurant,” said long-time vegetarian Moreno. “So, personally, I like that.” Opening for the eatery is slated for late summer. Plans are also in the works for the blighted area around the intersections of Milwaukee, Division and Ashland. CVS will be moving into the historic bank building and tenants are being acquired for some of the vacant storefronts. The area around the Nelson Algren fountain, which some residents have referred to as “pigeon poop park” has been cleaned up, with Moreno deciding to pull the benches from which many homeless persons once found their slumber.

In response to recent safety concerns at area bars, Alderman Waguespack has put into effect a moratorium on late-night liquor licenses. None of the already 18 licensed businesses will be affected, but there will be no new licenses issued until police get a handle on the current problem locations.

A hot topic amongst both alderman was the onslaught of graffiti that the neighborhood has been dealing with, with the number of tags on area buildings seeming to have exploded over the last few weeks. “If your building gets hit, take a photo, file a police report or call it in as soon as you can,” Waguespack pleaded to business owners. Waguespack, who is a regular at court proceedings that deal with vandalism offenders, asked the audience to get more involved by attending hearings and sentencings on behalf of the community. He discussed a case last year in which two vandals were caught red handed but only received what he calls “a slap on the wrist” because the business owner did not show up to prosecute the teens. The two offenders, who belong to the “VTC” tagging crew paid a fine and were put on a one-year probation and yet, the VTC tag continues to get thrown up on different buildings. Last week, police arrested a member of the Latin Kings who had been hitting the area hard with gang-related tagging. His hearing is set for April 4.

Alderman Moreno showed sincere interest in the neighborhood’s graffiti problem and seems to have given the issue much thought. “They’re coming to our area because it does have that flavor and that great diversity and they think that they can use it for their own purpose, and it drives me crazy,” he said. Moreno, who was an art major in college, sees a definite difference between graffiti artists and taggers. He has strove to promote an artist’s need for expression that not only allows them to remain on the right side of the law, but can result in compensation for the artist’s hard work. Moreno’s efforts with the Johalla Project finds business interested in having murals commissioned, an option which Moreno has proposed to graffiti artists in the past.

Overall, both aldermen aim to get a lot done in the ward this coming term, if they are re-elected. The two men, who according to Moreno agree 99.99% of the time, have been in the neighborhood long enough to know what things need changing and what should be left untouched. “We need to preserve the uniqueness of Wicker Park,” said Moreno, discussing the importance of the area’s artistic integrity and diversity. “I think that’s going to continue to be the calling for people to come to this neighborhood.”

-Nandika Doobay for The Wicker Park Bucktown Pipeline
Posted by Alisa at 5:16 PM